Privacy on public blockchains can only be attained through obfuscation.

The first thing to know about Hierarchical Deterministic (HD) Wallets & Seed Phrases is that they’re not a piece of software, but rather a specification for how cryptocurrency wallets can more reliably generate and store addresses from a single private key. In fact, hardware wallets predominantly are enabled by this key innovation.

With HD Wallets, a new address can be used for each transaction, making it difficult to trace the flow of funds or other assets.

No singular specification has dominated the blockchain industry or even a particular token. Many wallets have failed to implement the specification in a way that is easy to import and export from vendor to vendor. However, HD wallets and seed phrases still play a valuable role in the everyday use of blockchain software. The key is the structure of hereditary keys, derived from a common seed phrase. In most cases, an extended key is derived first, and the seed is then kept secret.

A deterministic wallet is nothing more than a way to regenerate many addresses from a single extended private key. We call it extended because it is twice the length of a normal key, which allows us to perform some cool math tricks. We won't get into the fancy math here, but it is helpful to understand how the keys are generated.

Seed Phrases are a user-friendly representation of the Extended Private Key used in an HD Wallet. The typically come in the form of 12-, 18-, or 24-word English words. They are the basis for backing up and restoring a hardware wallet. If the device were ever lost, restoring the wallet is as simple as re-entering the Seed Phrase into a new device. This method can also be used with software wallets and generally is seen as the preferred way to backup and restore cryptocurrency wallets. 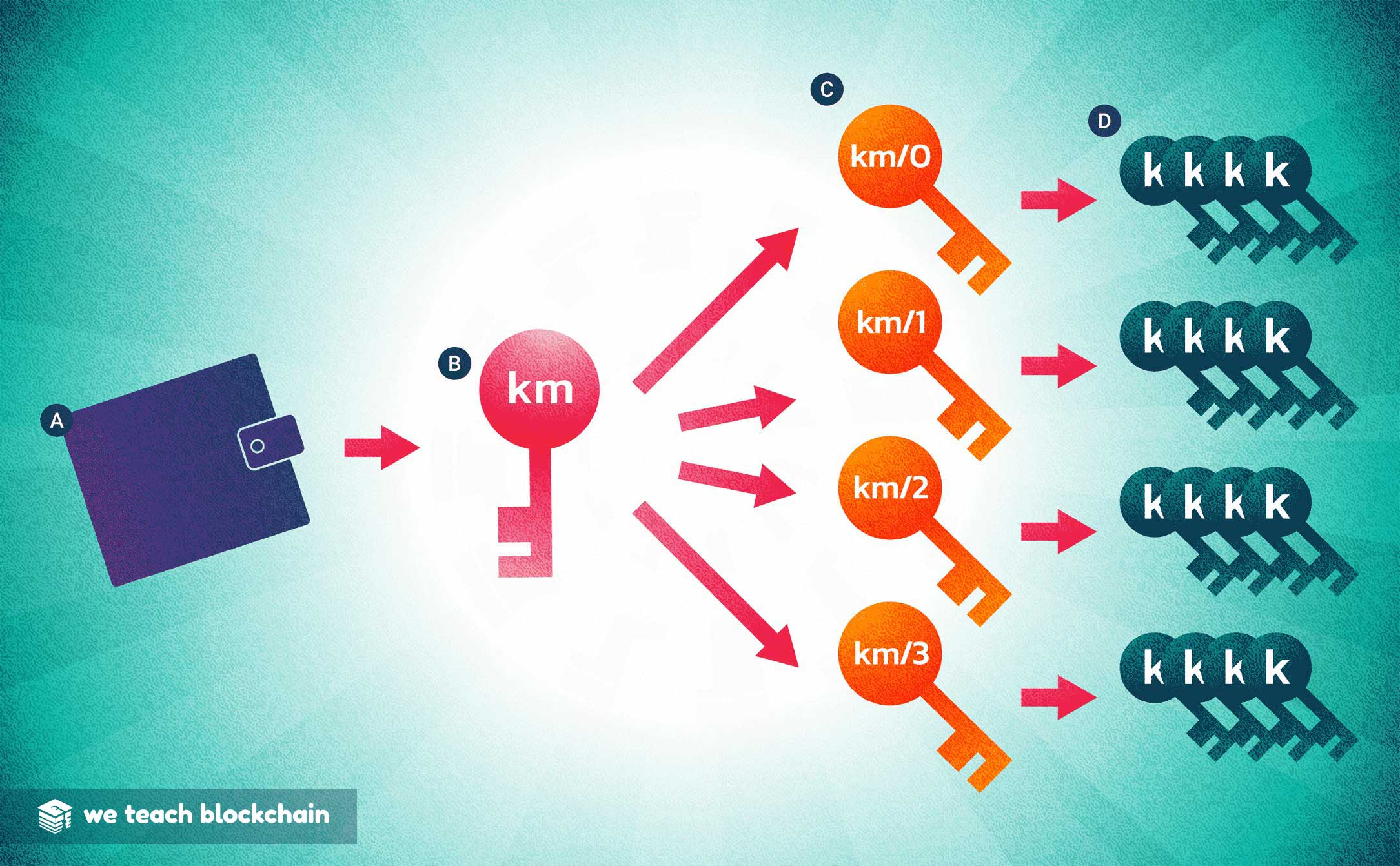 Hierarchical deterministic wallets use a seed phrase to generate multiple pseudonymous identities. This increases security by obfuscating the user's transaction history, and can even be implemented to use a new private key for every transaction. A: Seed; B: Master Key; C: Child Keys; D: Grandchild Keys.

Bitcoin Implementation Proposal #32 was adopted early 2012 in order to provide a solution for relative privacy on the Bitcoin network. While it was created for Bitcoin, it is now used in most cryptocurrencies, as well as some digital collectibles.

While each address is generated randomly, there are so many available permutations that it is next to impossible to ever end up with the same address as someone else.

The best way to understand how HD wallets work is by using one in real time. Fortunately, there is a handy BIP32 Deterministic Key Generator available online for us to play with! Although the specific derivation paths (algorithms) used vary between tokens, the concept is similar across platforms.

Once you open the BIP 32 Generator you’ll see the interface shown below.

Enter a seed phrase and write it down.

Scroll down and check your generated address. You can click the dropdown to set the derivation path, and change the Account (k) field to get a new address at that path.

3. Check the address on a block explorer

While it's not necessary, it can be a nice peace of mind to know for certain that your address is not already in use. Open a Blockchain Explorer and paste in your generated address to see if it's ever been used before. In this case - looks like we're safe!

Write down that seed phrase and keep it. You now have your own HD wallet. The BIP32 Generator runs clientside only, so as long as your computer is secure, then you have your own completely private set of Bitcoin addresses which you can use for anything you want. For reference, your chance of overlapping with someone else’s address is about the same as selecting a single grain of sand from the entire universe, so it’s usually pretty safe to skip Step 3.